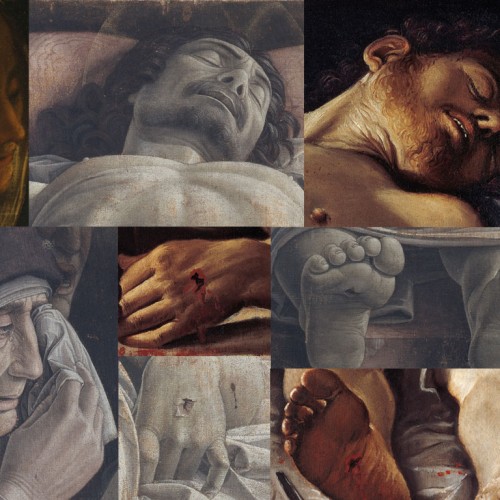 The two works, displayed side by side for the very first time, comprise the second outstanding dialogue devised by the Pinacoteca di Brera, a museum in the process of renewing its approach in an effort to offer its visitors food for thought with a collection that includes some of the most important masterpieces of painting in the world.

Mantegna’s work will be shown not only alongside Carracci’s version but also with another version of the same theme, the Lamentation over the Dead Christ, painted by Orazio Borgianni in 1615 and on loan from the Galleria Spada in Rome.
Illustrating the painter’s mastery of perspective, and with a strength of expression coupled with stern composure making it one of the best-known symbols of Italian art, Mantegna’s Lamentation over the Dead Christ, which can be dated to around 1480, was remarkably popular as a model in the 16th and 17th centuries. We know this thanks to a prestigious series of works clearly inspired by it, including Carracci’s painting (dated 1583–5) which underscores the crude realism of the scene by highlighting the instruments of Christ’s martyrdom, focusing in particular on the Crown of Thorns in the foreground to point up the brutality of the torture so recently administered. While the third work in the dialogue, by Orazio Borgianni, develops the theme against a background more reminiscent of Caravaggio’s style.