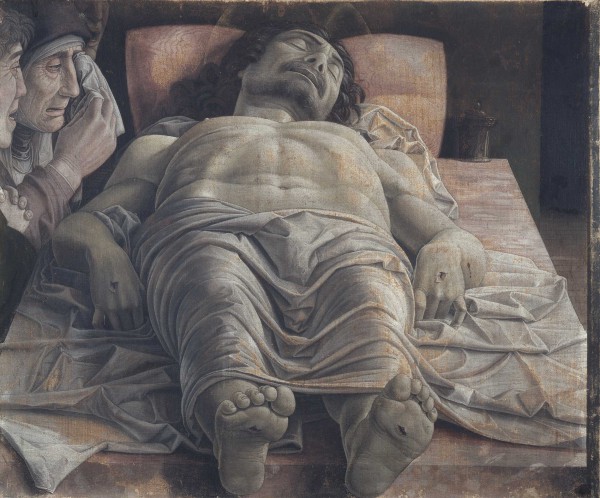 The most convincing hypothesis, despite the uncertainties stemming from the existence of several variants of the same subject, identifies the painting in Brera with the “foreshortened Christ” found in Mantegna’s studio at the time of his death, sold by his son Ludovico to Cardinal Sigismondo Gonzaga and inventoried among the property of the lords of Mantua in 1627.

The subsequent fate of the painting is still a matter of debate among scholars, faced with a complicated series of changes of ownership only partially – and confusedly – documented: according to the most recent but not conclusive theory, the painting was sold in 1628 to Charles I of England along with the most valuable pieces in the Gonzaga collection; it then passed onto the antique market and into the collection of Cardinal Mazarin; on the latter’s dispersal it vanished for over a century. No more was heard of it until the beginning of the 19th century: in 1806, in fact, the secretary of the Accademia di Brera Giuseppe Bossi asked the sculptor Antonio Canova to act as a go-between in the purchase of his “sought-after Mantegna,” which finally made its way into the Pinacoteca in 1824.
The iconography of the work, probably intended for the artist’s private devotion, refers to the compositional scheme of the Lamentation over the Dead Christ, in which mourners are gathered around the body prepared for burial, laid out on the stone of unction and already anointed with perfumes.
The composition produces a great emotional impact, accentuated by the extreme foreshortening: Christ’s body is very close to the viewpoint of the observer who, looking at it, is drawn into the center of the drama; moreover, every detail is enhanced by the incisiveness of the lines, which compels the gaze to linger over the most terrible details, over the members stiffened in rigor mortis as well as the wounds, ostentatiously presented in the foreground as called for by the tradition of this type of image.
It is an absolute peak in Mantegna’s production, a work whose expressive force, severe composure and masterly handling of the illusion of perspective have made it one of the best-known symbols of the Italian Renaissance.

“Have you ever seen Christ like this? THe extreme foreshortening of his body is shocking, even irreverent. No hope of resurrection here on this cold mortuary slab. Yet His Presence is so intense; the cramped hands, the dried wounds, his powerful features and those sculpted folds of the shroud. Mary at least can cry, but we feel like uninvited voyeurs. Is it any surprise this painting never left Mantegna’s studio? Who would take it? How could he let it go?”
Sarah Dunant 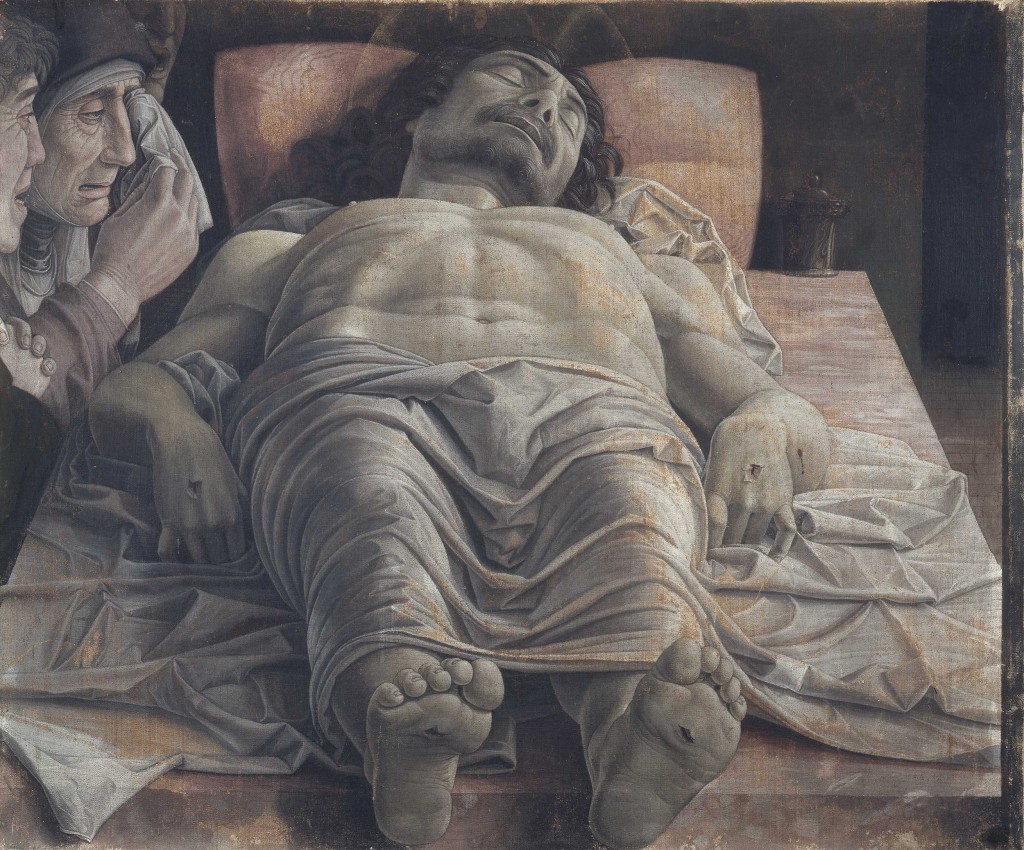