Madonna and Child with St. Peter and St. Paul, St. Ansovinus and St. Jerome (Madonna of the Candle)

Home | Collection | The Collection online | Search the collection | Madonna and Child with St. Peter and St. Paul, St. Ansovinus and St. Jerome (Madonna of the Candle)
Explore by | Search 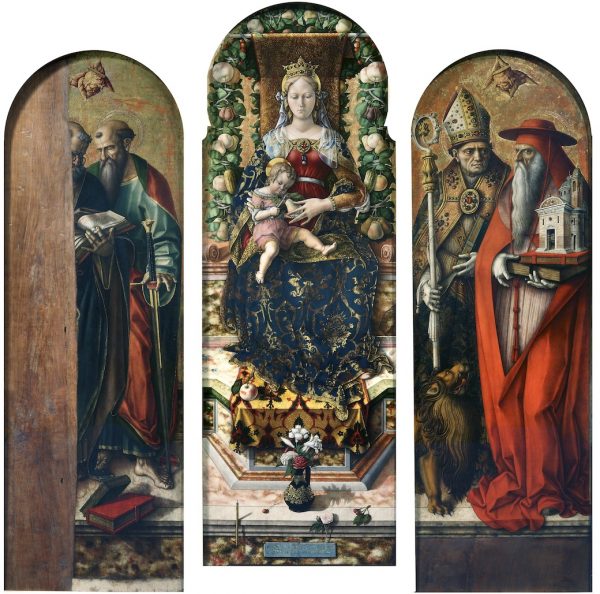 The panel came to Brera from the cathedral of San Domenico at Camerino together with a significant group of works: the panel with Saints Ansovinus and Jerome, not recognized at the time as part of the same polyptych and ceded to the Gallerie dell’Accademia in Venice, the Camerino Triptych and the Crucifixion, long thought to belong to the same decorative complex.
According to the most recent hypothesis, the Madonna della Candeletta was originally the central compartment of a polyptych with two rows of panels, commissioned in 1488 for the high altar of Camerino Cathedral by the chaplain Bartolomeo di Angelo Consuli and probably damaged by the devastating earthquake that destroyed the cathedral in 1799.
In spite of the mutilations and retouches that significantly modified its appearance over the course of the 19th century, the work is certainly one of the most mysterious and evocative in the Pinacoteca, a source of inexhaustible fascination owing to the profusion of decorative elements and the somewhat self-satisfied display of illusionistic foreshortenings with which Crivelli embellishes the entire composition, but without creating a credible and measurable space in perspective: a matchless example of the originality with which Crivelli reworked the cardinal principles of the Central Italian Renaissance.
The Madonna, her face an oval of unnatural perfection and her slender hands a model of sophistication, offers the Christ Child a pear, possibly symbolising the sweetness of Redemption. The two figures are set beneath a trellis of woven branches whose fruit alludes to Christ’s Passion and death. The candle, held on the step by a drop of wax, and the vase of flowers and fruit on the step are intended to look like offerings from the observer, who is thus prompted to interact more closely with the painted space.

“Queen of Heaven or Queen of the May? She is costumed in the latest fashions – square- collared dress in chic red, centre-parted hair with blonde ringlets, delicate eyebrows. Holy virgin or village girl in the harvest pageant? Luminous, luscious, impossibly precious. The candle on the altar tricks our eye, invites us in, but the perfection of the lilies’ shadow makes a barrier of the light. This is theatre, beguiling, distant. We can’t touch, really. ”
Lisa Hilton 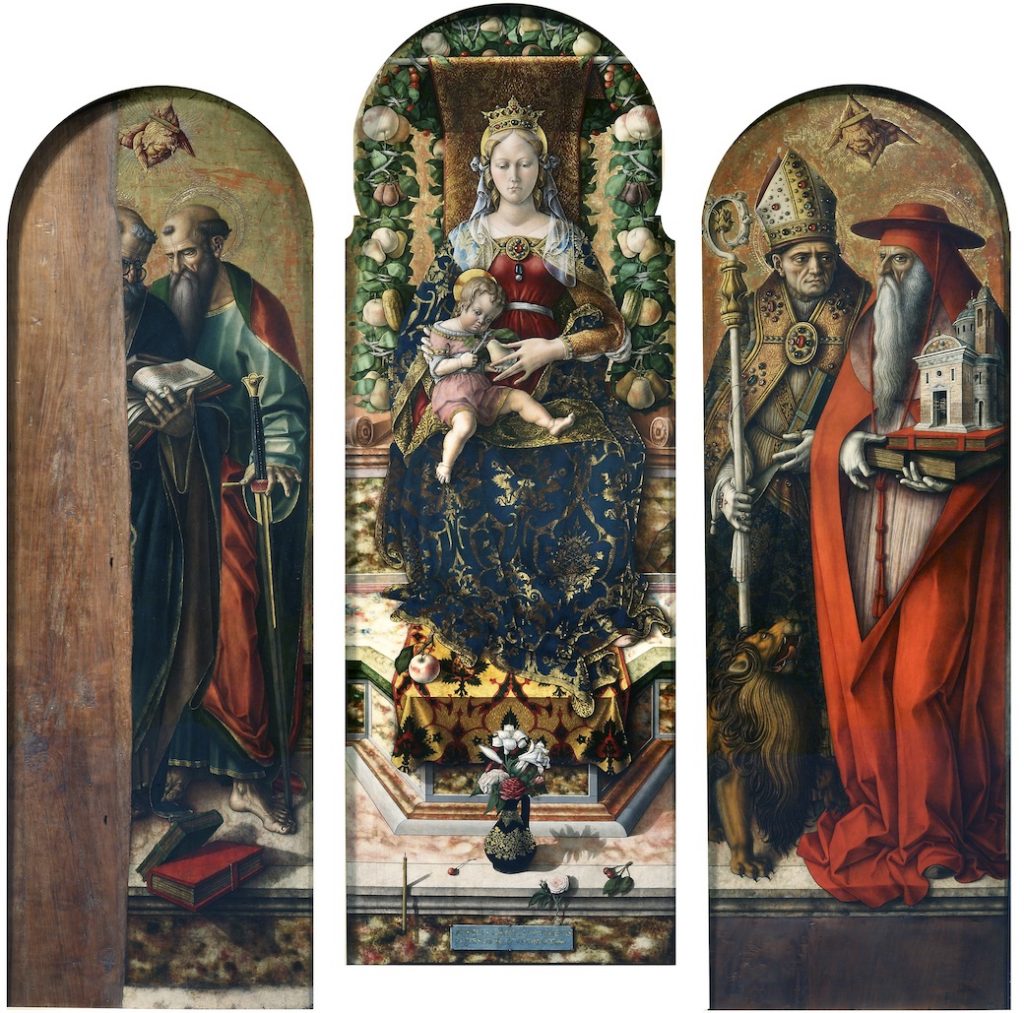