Restoring Raphael’s Marriage of the Virgin

Raphael painted this altarpiece, signed Raphael Urbinas XDIIII (fig. 1) and unquestionably one of the Pinacoteca di Brera’s most celebated paintings, for the Franciscan church in Città di Castello. The picture left Umbria for good when the citizens surrendered it to the “liberating” army of General Giuseppe Lechi, a native of Brescia. Acquired by Eugène de Beauharnais in the early 19th century, it was assigned to the Pinacoteca by vice-regal decree.

The painting, which measures 173.5 x 120.7 cm., is made up of seven horizontal broadleaf planks now held in place by three cross-pieces and twenty-three butterfly dowels coated with lead white and varnish (fig. 2). The planks were primed with plaster and glue sizing, on which the artist traced the drawing from a now lost preparatory cartoon. If we observe the painting under infrared light (fig. 3), we will notice a meticulous preparatory drawing transferred from a cartoon, dotted in every detail in black ink with a paintbrush, and from direct engraving for the architectural parts.

Raphael applied a light, warm colour ground over the drawing using lead white, lead and tin yellow and powdered glass to reduce the sizing’s absorbency and thus facilitate the application of oil paint in thin layers. Raphael’s technique was extremely sophisticated: the painter proceeded by applying one thin layer of colour on top of another in painting his figures’ flesh areas, while he used broad, textured brushstrokes to define the drapery and the architecture, with gold and silver embroidery adorning the figures’ garments (fig. 4).

The altarpiece has been restored on several different occasions in the past. The first, probably dating back to the 18th century, is only known from a description supplied by Giuseppe Molteni, the painter and restorer who repaired the support and cleaned the picture in a fairly balanced operation in 1858. After a visitor took a hammer to the picture a hundred years later, Maurio Pelliccioli once again intervened to putty and repaint the areas damaged by this act of vandalism (fig. 5).
A hundred and fifty years after Molteni’s restoration, the Marriage was once again so badly affected by the ageing of the layers of material applied to it that the time had come for a new restoration, which was conducted by the Pinacoteca’s own restorers (fig. 6).

he painting was restored from January 2008 to March 2009 to coincide with the Pinacoteca di Brera’s bicentennary celebrations.
Restoration was preceded by a meticulous diagnostic exploration campaign to identify the materials used to produce the original masterpiece and those used in earlier restorations. The campaign was conducted in conjunction with a number of leading research institutes (fig. 7).
The aim of the operation was to recover the harmonious palette of the original altarpiece, which had been lost through the stratification of various layers of varnish and patinas that had deteriorated over time, and to monitor any flaws in the paint’s adherence to the sized surface.
The deteriorated restoration materials were removed both gradually and selectively, taking into consideration the deterioration of certain pigments with the intention of maintaining an overall balance among the picture’s various tonal shades (fig. 8).

After cleaning, the paint film appeared to be in a good state of conservation overall. The most visible lacunae were those caused by the act of vandalism in 1958. Repainting, using a recognisable dotting technique and reversible watercolours and varnish, was strictly confined to lacunae and abrasions. The final varnish made it possible to appreciate the picture again in its full glory.
The altarpiece was then returned to its Neo-classical frame, which was also specially restored for the occasion (fig.

The Marriage of the Virgin   First Dialogue Raphael and Perugino 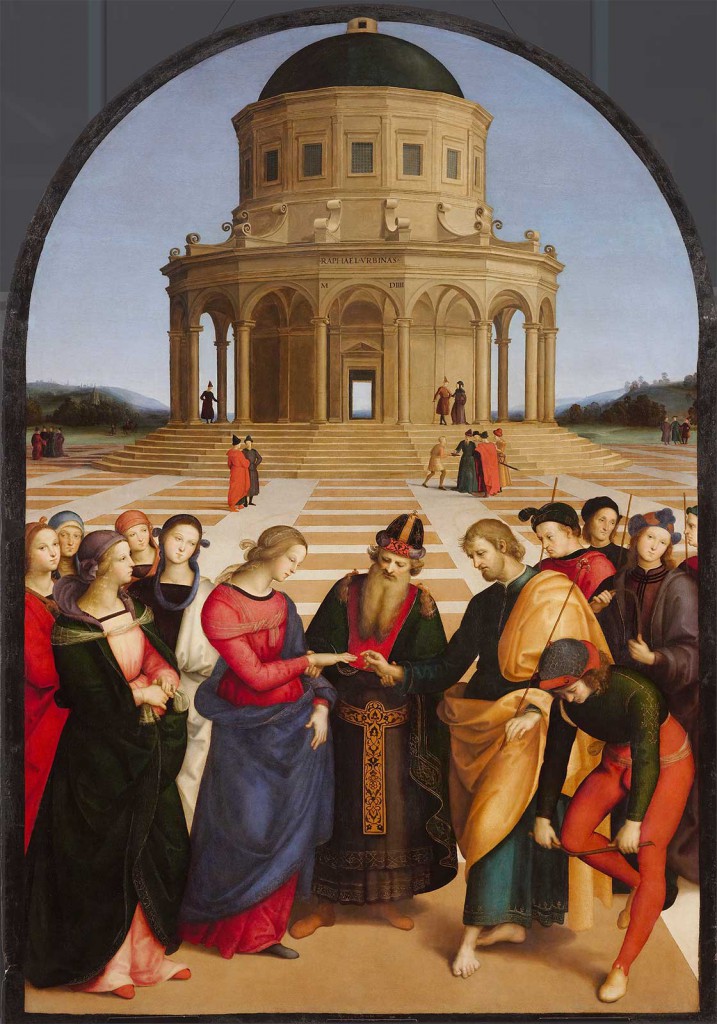