After the Napoleonic abolitions, the altarpiece came to Brera from the church of San Bernardino in Urbino, erected by Federico da Montefeltro to house his own grave. It is possible, but not certain, that the picture was originally painted for this location, and for the duke’s tomb. The interventions of restoration and recent studies have confirmed that the size of the work has been reduced and that the artist had intended the architecture to be more spacious and airy, with the figures gathered under the huge lantern of a dome. Despite the mutilation it has undergone, the work constitutes an exemplary result of the perspective research conducted by Central Italian artists in the late 15th century.
The iconography is that of the Sacra Conversazione: at the center the Virgin is seated on a throne, holding the sleeping Child; around her are arranged, from the left, St. John the Baptist, St. Bernardine, St. Jerome beating his breast with a stone, St. Francis displaying the stigmata, St. Peter Martyr with the wound on his head and St. John the Evangelist. Behind them we see the archangels and, kneeling in front of the sacred group, Federico da Montefeltro in the dress of a military commander.
In the altarpiece the private history of the client is intertwined with religious devotion and the public – and therefore political – purpose for which it was conceived, creating an image whose significance is still debated by scholars today.
It is likely that Federico commissioned it after the birth of his heir, followed by the death of his wife Battista Sforza (1472), and that he wanted to underline the protection granted by the Virgin to his own dynastic authority through this work dense in symbols. It may no longer be possible for us to fully understand their meaning: for example, the ostrich’s egg represents the miraculous maternity of the Virgin but is also a heraldic emblem of the Montefeltro family; the sleeping Child alludes to maternity and at the same time to death, supporting the hypothesis of the funerary destination of the work.

“This is a picture of Silence. The Holy Mother and child, the Saints, even the lone kneeling knight: their eyes do not meet, their lips are sealed. Silence fills the space. The picture unravels a contradiction: the mystery of what is not, being amongst us. But silent does not mean isolated. Each is telling their own story, in a world of meaning where words do not suffice. Their drowsy expressions are childlike: they are listening to something we cannot hear, their eyes deep in contemplation. The building contains them; here nothing can be lost; they are guarding the hidden truth of absolute beauty.”
Ogawa Yoko 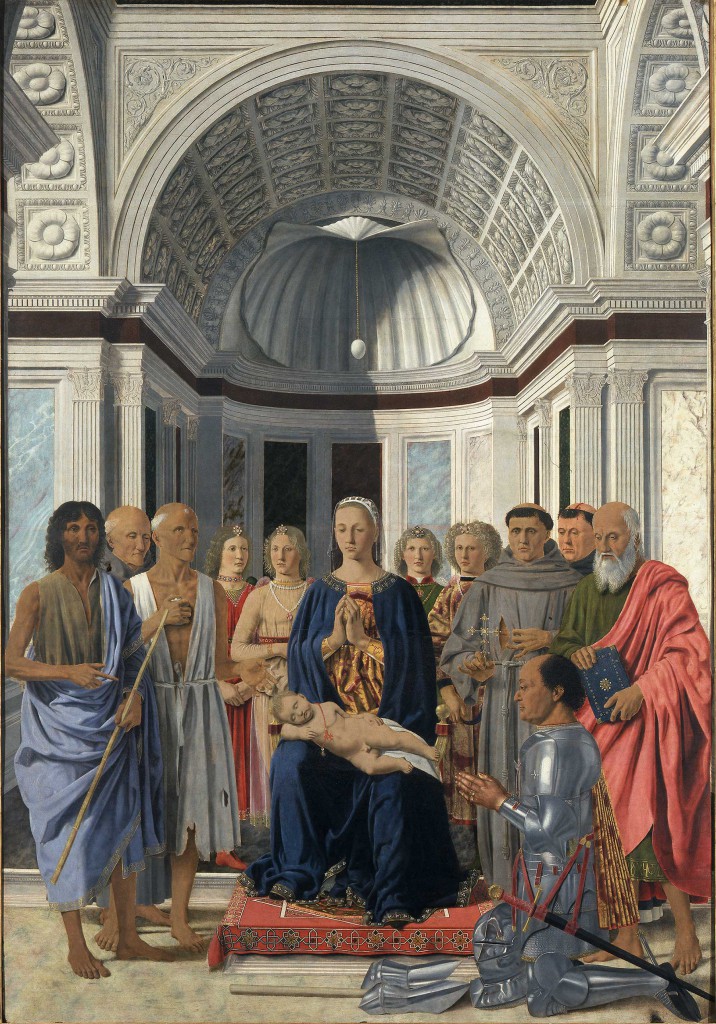