Extended until February 19th, 2023 – In the tenth dialogue, for the first time the public will see a work from the modern collection, set to be exhibited soon in the rooms of Palazzo Citterio-Brera Modern. The Brera painting Rebel Angel with White Moon (1955) by Osvaldo Licini (Monte Vidon Corrado 1894 – 1958) will be compared with a painting of similar subject, Rebel Angel on a Dark Red Background (1946), on loan from the Ascoli Piceno Galleria d’Arte Contemporanea. 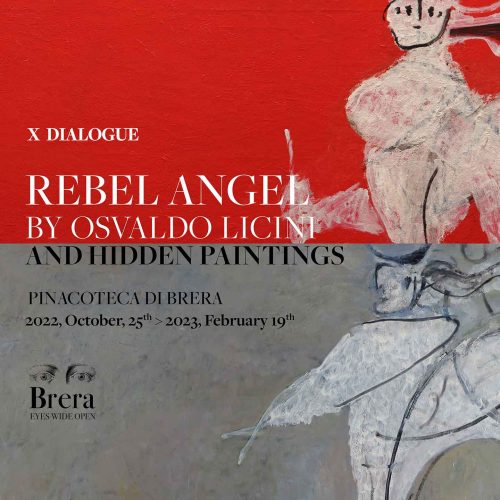 From October 25th, 2022 to January 22th, 2023 (extended to 19th February), the Pinacoteca di Brera presents a new dialogue, its tenth, entitled Osvaldo Licini’s Rebel Angels and Hidden Paintings. It thus resumes the museum’s initiative of directly comparing a work from its collection to a guest painting that presents stylistic, compositional, and iconographic similarities, according to a project conceived by director James Bradburne in 2016 that coincided at the outset with the renovations of the museum’s rooms that have led to the complete renovation of the Pinacoteca in recent years.

A dialogue, visible in Room 18, that takes its cue from the recent restoration of the Brera painting and the discovery of significant ‘structural’ similarities precisely with the painting of a similar subject preserved in Ascoli Piceno.

BreraCARD No longer a simple ticket but a card, a real subscription • € 15,00 Full • € 10,00 Reduced The BreraCARD is a virtual nominal card that will entitle visitors to return to the Pinacoteca an unlimited number of times for three months (always with mandatory reservation on BreraBooking.org) and to access for one year BreraPLUS+, the online platform that enriches the museum experience with multimedia content, documentaries, special programs, concerts, premieres and more. Purchasing will no longer be in the museum, but on brerabooking.org (with reservations required), the ticketing counter will give way to a help desk charged with responding to the needs of the public.