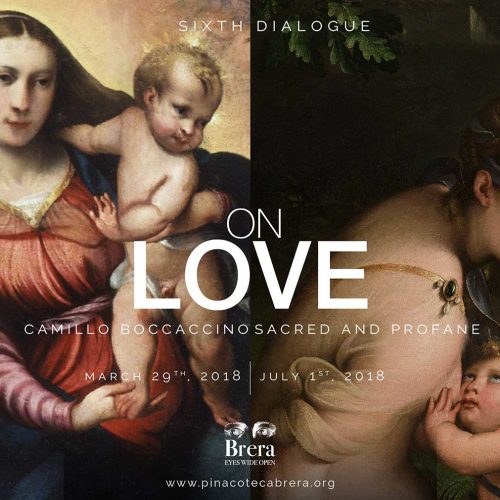 The Pinacoteca di Brera painting, depicting the Madonna and Child in Glory with St. Bartholomew, St. John the Baptist, St. Albert of Trapani and St. Jerome, comes from the Carmelite church of San Bartolomeo in Cremona.
It will be interacting with another two paintings by Boccaccino – the Venus and Cupid from Geo Poletti’s collection, which Giovan Paolo Lomazzo saw hanging in a Milan home in the 16th century and was so struck by it that he sang its praises in a sonnet; and a very recent discovery, also on a profane theme, depicting Cupid Admiring His Reflection in a Shield, from a private collection – and with a picture by Giulio Cesare Procaccini entitled Venus and Cupid, depicting an extremely elegant female nude reclining in a meadow, from a French private collection, testifying to the enduring appeal that the model held also for the following generation of artists.

Unlike the earlier Dialogues based on the direct juxtaposition of the works, the Sixth Dialogue urges visitors to allow their gaze to wander by devising a system of pictorial echoes and resonances bouncing back from one side of the exhibition hall to the other.
Inoltre dal 29 marzo riaprono al pubblico i saloni napoleonici, da sempre centro pulsante e fulcro del processo di The Pinacoteca’s Napoleonic rooms will be reopening to the public on 29 March.
Ever the beating heart and epicentre of the museum’s transformation scheme, this area has been given a spectacular overhaul which includes the renovation of fully seven rooms (VIII – IX – X – XI – XII – XIV – XV).

As in the other rooms which have already been renovated, new captions and lighting will enhance the pictures displayed in the Napoleonic rooms on velvety dark green walls kissed by the light filtering from the large skylights that are one of these halls’ most interesting original features.