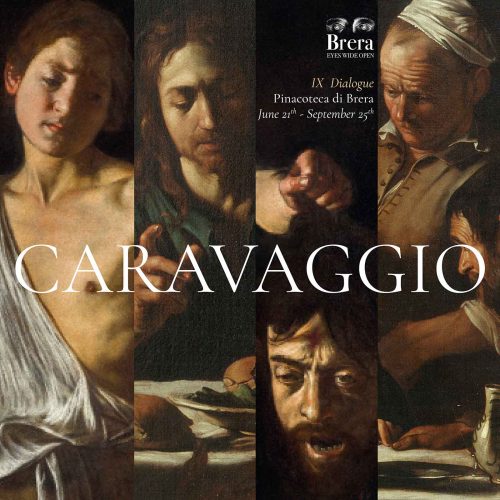 The Pinacoteca di Brera restarts the tradition of comparing major artworks from its collection with guest paintings started by director James Bradburne in 2016 with an exhibition centered on one of the greatest protagonists of art history of all time.

From June 21 to Sept. 25, 2022, the museum presented “Caravaggio,” a Ninth Dialogue that will juxtapose two absolute masterpieces by the Lombard genius such as “The Supper at Emmaus” from the Pinacoteca di Brera and “David with the Head of Goliath” from the Galleria Borghese in Rome.

The Ninth Dialogue is the third appointment to host artworks by Caravaggio in the Pinacoteca: an exhibition in 2009 the year of the bicentennial, Caravaggio hosts Caravaggio, curated by Mina Gregori and Amalia Pacia, had for the first time compared the Supper in Emmaus from Brera with the 1602 Supper from the National Gallery in London, and in the catalog there had been important contributions on the two works and their critical vicissitudes. A more recent event, in 2017, Around Caravaggio. A Question of Attribution, curated by Nicola Spinosa and James Bradburne, had made it possible to look at some seventeenth-century copies by Louis Finson on display and to reason about a complex attributional affair.

Curated by Letizia Lodi, the new “Caravaggio” exhibition will give the public a chance to be able to witness an event that stages a never-before-seen comparison: in fact, the two paintings, both belonging to the artist’s late production, executed between Rome and Naples, will be exhibited side by side for the first time with the public and scholars called to reason and confront the issue of the dating of David with the Head of Goliath, still much debated by critics, thanks in part to recent studies by Maria Cristina Terzaghi, Francesca Cappelletti, Rossella Vodret, Alessandro Zuccari, Antonio Iommelli, and Gianni Papi.

The unique opportunity to admire and meditate thanks to a close comparison allowed the public to grasp the details, even the gory ones of extreme realism, of the Borghese painting: such as the severed head of the Goliath, a probable self-portrait of the artist, Caravaggio’s peculiar color drafts, the glint of the sword, with the Augustinian motto “H-AS-OS” (“Humilitas occidit superbiam”) initialed in the shell, the small folds of David’s white shirt.

The BreraCARD is a virtual nominal card that will entitle visitors to return to the Pinacoteca an unlimited number of times for three months (always with mandatory reservation on BreraBooking.org) and to access for one year BreraPLUS+, the online platform that enriches the museum experience with multimedia content, documentaries, special programs, concerts, premieres and more. Purchasing will no longer be in the museum, but on brerabooking.org (with reservations required), the ticketing counter will give way to a help desk charged with responding to the needs of the public.