Head of a Bull 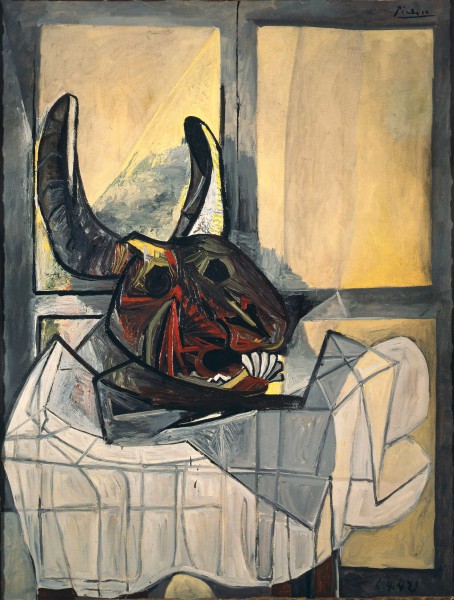 The expressive brutality of the animal’s bleeding, severed head in such flagrant contrast with the white cloth reminds us that the picture was painted in 1942, during the war. The thoroughly Cubist rejection of any three-dimensional effect eliminates the space between the window in the background and the bloody object, which thus tilts powerfully forward in distressing isolation. Picasso had painted another, more geometric, abstract version of this picture one month earlier, now at the Kunstsammlung, Düsseldorf.
The canvas was acquired, probably immediately after its execution, by Louise Leiris, wife of the poet Michel Leiris and owner of the famous Parisian gallery that managed to secure much of Picasso’s output during the Second World War.
The work was included in the first major exhibition devoted to the Spanish artist in Paris after the end of the conflict. The brutality and expressive power of this bleeding head, set on a table front of the frame of a window, took on the value of a symbol of isolation and horror, and as such was evoked on more than one occasion by artists like Cassinari and Morlotti, who had seen it in the rooms of the Leiris gallery.
Bought by Riccardo Gualino, the canvas passed, after his death, into the hands of Emilio Jesi.